Frosty: One of my best V8 victories

Frosty: One of my best V8 victories Mark Winterbottom says that today’s victory in Race 16 of the V8 Supercars Championship Series at the Sucrogen Townsville 400 was one of his best in the category.

The Orrcon Steel Ford Performance Racing star dominated the 200km race after a smart early pit strategy vaulted him to the front of the pack, holding off a late challenge from championship leader James Courtney for the win.

To add to the joy of the victory, all three FPR Falcons (Winterbottom, Paul Dumbrell and Steve Richards) finished inside the top five.

Winterbottom says that the win rates high on his achievements. 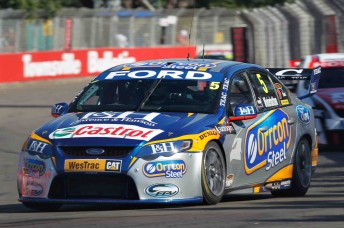 “Today’s win is probably one of the best wins of my career,”
he said.

“I had a 12 second gap but then had to really fight for the win and hold off James over the final stages.

“I had some good pace early but when you are stuck behind someone your brakes begin to overheat, so it was good to get some clear air ahead of me and the Orrcon Steel FPR Falcon was really working well.

“There are some very happy guys in the garage – as there should be.  When your Truckie gives you a hug you know that it is a good result.

“It’s a great way to go into the mid season break, we’ll go home an celebrate this win in Melbourne so everyone in the team, both travelling and workshop based, can enjoy it.”

Also having a weekend to remember was his FPR team-mate Richards who today celebrated his 38th birthday with fifth place – his second top 10 result in as many races.

“It’s been a long time coming but things are starting to fall into place … qualifying was obviously a lot better than some of my previous results and really set me up for a good weekend.

“The car felt great in the middle stint. It was really well balanced and really consistent, add to that I had good reserves of brake-spray (water coolant for the brakes to prevent overheating) so I was able go pretty deep under brakes.

“It wasn’t the best start to the season but we’re now making progress and to have three FPR Falcons in the top five is testament to that.”