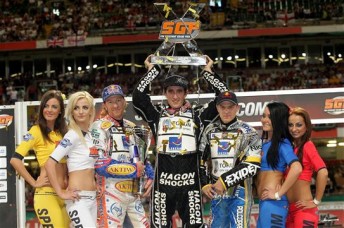 The 2008 Australian Champion admitted that he was taken aback by a raucous, record-breaking 44,150 crowd, but showed no sign of nerves on his first appearance in the Welsh capital.

He led Rune Holta, Tomasz Gollob and Nicki Pedersen home in his opening race and went on to accrue 10 points from his five heats. This was before he stormed through his semi-final, before sealing his landmark victory – a win that left the bubbly Sydneysider struggling for words.

“I’m stoked to be here and I honestly can’t believe it. It was a bit of blur and I can’t remember how I got there, but I did,” said Holder.

“What happened tonight was unreal. Even on the track walk when there were just a few thousand people, I heard the atmosphere and knew it was going to be a good one.

“On the parade lap I didn’t know whether to laugh or cry. It was a pretty intense sort of feeling.

“I got the win in heat one, which was awesome for me. I plugged my way through the heats and made two good starts when I had to.

“I honestly didn’t think that was possible and I don’t have the words for it. I’m stoked that it happened. I’ve got no words – I’m so happy.”

Earlier in the night Holder and Crump came together during a heat race which led to a heated discussion between the pair, however, all was forgotten by the end of the night.

“I’ve got to apologise to Jason. I was probably out of order there. It was heat of the moment I guess. I have no hard feelings and I hope he’s the same,” said Holder

Crump had a more humourous when reflecting on the incident “Chris had his skirt on and I pulled my handbag out for a minute.”

While Holder surged up to fifth in the World Championship with 60 points, Hampel took charge at the top on 92 – two ahead of his fellow countryman Tomasz Gollob.