Whincup crushes the field in Townsville

Whincup crushes the field in Townsville 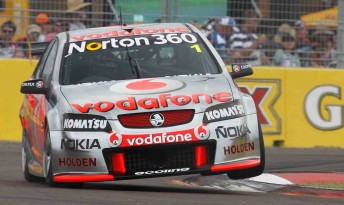 Jamie Whincup on his way to victory in Race 15

Jamie Whincup has dominated the opening race of the Sucrogen Townsville 400, leading almost every lap of the 72-lap event.

The TeamVodafone driver decimated the field in Race 15 of the V8 Supercars Championship Series, with the only glitch in his race being a slow start.

Both Garth Tander (Toll Holden Racing Team) and Mark Winterbottom (Orrcon Ford Performance Racing) passed Whincup at the start, but it only took him a handful of laps to reassert his position to claim the top spot.

In the opening stages of the race, Courtney clashed with his Jim Beam Racing team-mate Steve Johnson, turning Johnson around and out of the running. Despite some minor damage to Courtney’s front bar, he raced on to fifth to marginally hold his title lead over Whincup. However, Courtney’s position may be in jeopardy with a  stewards meeting to follow regarding the clash with Johnson, who recovered from the spin to take 11th place.

After a poor qualifying position, Russell Ingall mounted a mega comeback in his Supercheap Auto Racing Commodore VE. ‘The Enforcer’ eventually finished sixth after a great battle over the last few laps with Team BOC’s Jason Richards, who was equally as strong during the race after a difficult qualifying session.

Craig Lowndes was provisional fastest in qualifying, but his day only got worse. A mistake and the top 10 shootout, followed by a clash with the concrete wall at the opening corner put paid to his run.

In the ‘did not finish’ category was Jason Bright, Tony D’Alberto and Andrew Thompson. Bright had engine problems, while D’Alberto did not start the race after rear end problems plagued his entry.