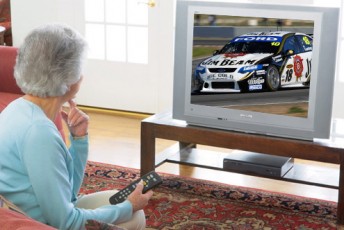 This weekend’s racing action is centred around the Sucrogen Townsville 400 and British Grand Prix at Silverstone.

A return to north Queensland for the second Sucrogen Townsville 400. Coverage on Seven airs from 1.30pm Saturday, including qualifying the Top-10 Shootout and the opening 200km race. Sunday’s qualifying and race #2 action is from midday. Also keep an eye on Foxsports for race replays.

ONE HD will show the Nationwide Dollar General 300 from Chicago from 9.30am Saturday morning. The NASCAR Sprint Cup Series is LIVE on Foxsports on Sunday morning with the Lifelock.com 400 from 8.30am.

The inaugural Rally Bulgaria is on this weekend. Stay across ONE HD for daily highlights beginning with the opening leg from 6pm on Saturday evening.

The next round of the Speedway Grand Prix Series will be from the Millennium Stadium in Cardiff. Can world champion Jason Crump get back on the top step of the podium? Watch Foxsports from 2am Sunday morning. The World Superbike Championships are LIVE from Brno on Foxsports from 7.30pm Sunday evening.

The Porsche Supercup from Silverstone can be seen LIVE on Eurosport from 7.45pm on Sunday evening.