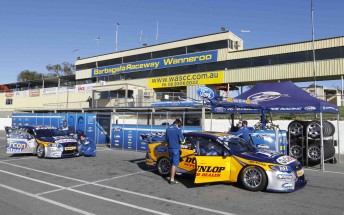 Barbagallo Raceway is set to be reintroduced to the V8 Supercars Championship Series calendar next year, and the announcement could come as early as next week.

The Western Australian round was taken off the calendar in February this year after a dispute between the West Australian Sporting Car Club and V8 Supercars could not be resolved.

The new deal has been brokered in conjunction with the West Australian Government.

One of the sticking points in the demise of this year’s race was the pit lane structure and its occupational health and safety risks. Those issues will be resolved, ensuring the V8s can return.

V8 Supercars Australia CEO Martin Whitaker told Speedcafe.com.au that he is close to making an announcement.

“It’s always been our intent to make sure we’re in every state, plus the Northern Territory obviously,” he said.

“That is clearly our objective. It is one that sits very well with the fans, particularly the broad fan base across the country – and don’t forget about the teams, their investors and sponsors of the sport.

Whitaker wouldn’t reveal the date of the Barbagallo announcement.

“I don’t know what the exact date is, but the objective was to try and make sure that we get something done by the end of July,” he said.

While the V8s did not compete in WA this year, the category’s western fans did get a taste of the sport whenTeamVodafone, Ford Performance Racing and the Toll Holden Racing Team conducted various activities in Perth last month.

Meanwhile, the 2011 V8 calendar is starting to take shape. Whitaker says that it should be sorted by early September.

“At the moment, we’re obviously right into sorting out where we are as far as the calendars are concerned,” he said.

“I’ve made it pretty clear inside the office that we’ll wait until Townsville is out of the way, clear the decks and concentrate on getting it sorted out. It’s the best strategy. We’ve had a lot to think about just in terms of getting Townsville up and running.

“It’s a bit of a jigsaw that has to come together – no different from previous years.”