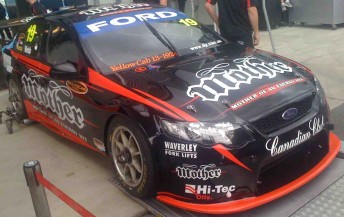 A raft of new looks – big and small – will be seen for the first time this weekend at the Sucrogen Townsville 400 in far north Queensland.

Leading the change is Jonathon Webb’s Mother Energy Drinks Falcon FG. The Dick Johnson Racing-prepared Falcon has received the biggest colour scheme change since Darwin after the announcement earlier this week that he had picked up major support for the #19 entry for the rest of the 2010 season.

It was also announced at the same time that Coca Cola Amatil – the parent company of Mother – has become the ‘Official non-alcoholic beverage to the v8 Supercars Championship Series.’ 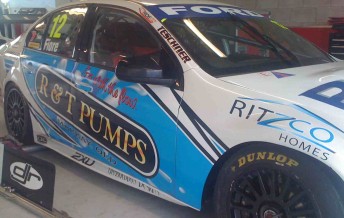 Another significant colour scheme/sponsor change is Dean Fiore’s Triple F Racing Falcon FG. The privateer team welcomes Mackay-based R&T Pumps on the right-hand side of the car, and Townsville-based McSheds on the left. Ritzco Homes has also jumped on board for the round.

Centaur Racing welcomes back a former sponsor in Smart City. The vocational college backed Tony D’Alberto during his title-winning Fujitsu V8 Series campaign in 2007 and it has signed on for this round only.

D’Alberto is hoping that the return of Smart City will also bring some strong results. D’Alberto currently sits 15th in the V8 Championship Series – the highest position he has ever been in his third year Main Series career. Paul Dumbrell’s The Bottle-O Racing Falcon has also had a minor revision to front of his Ford Performance Racing-prepared Falcon FG.

The FastR Insurance branding has been replaced by carsure.com.au, while the VB Gold logo on the bonnet has increased in size, assuming the front part of the bonnet formally occupied by The Bottle-O.

Also, on the rear quarter panel of the #55 Ford, Autobarn has replaced the FastR Insurance stickers. Other livery changes also comes to Gulf Western Oils Racing. To coincide with the return to the Main Series of Cameron McConville, Jax Quickfit Tyres has got some signage on the rear window and rear bar. The Jax Quickfit Tyres Commodore that McConville drove in the Fujitsu V8 Series at Winton will be steered by Craig Baird this weekend in the FV8 Series.

Also, one change that every V8 team will have to accommodate is that they will all be required to run ‘Sucrogen’ branding on each door. The Sucrogen stickers will appear where the V8 Supercars logo usually occupies. The Sucrogen Townsville 400 kicks off tomorrow with four practices sessions – the first at 10.30am.

Saturday and Sunday will both have qualifying sessions in the morning followed by a 200km race in the afternoon.

To get the inside line on this weekend’s round of the V8 Supercars Championship Series at Townsville’s street track – including an in depth chat with returning star McConville – CLICK HERE for Speedcafe’s exclusive V8 Race Guide, brought to you by Vodafone, IRWIN Tools, Orrcon Steel, Pirtek and Jack Daniel’s.