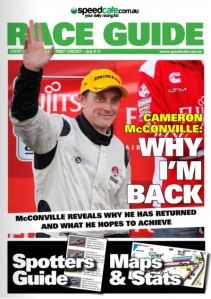 Speedcafe.com.au’s V8 and F1 Race Guides are now available ahead of a big weekend of motor racing action across the world.

In the world of V8 Supercars, Australia’s number one racing championship heads to far north Queensland for the second running of the Sucrogen Townsville 400.

The V8 Race Guide focuses on Cameron McConville and his return to the Main V8 Series. After retiring from full-time racing at the end of last year, McConville has accepted a drive in the Gulf Western Oils Commodore VE, replacing rookie Daniel Gaunt.

McConville tells the Speedcafe Race Guide why he’s coming back, what he wants to get out of it and how this could be the start of a full-time return.

In Formula One, the championship reaches the halfway point at the British Grand Prix this weekend – and the championship fight is tight. Five drivers are all in with a shot of winning, which will make the Silverstone round ultra important.

On a local Australian front, the big story from the last round at Valencia was Mark Webber’s horrifying flip after collecting the rear wheel of Heikki Kovalainen’s Lotus. 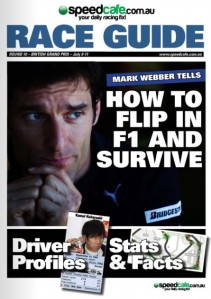 In the F1 Race Guide, Webber explains the accident and what was going through his mind – and we bet you can guess the word that first popped into his head!

The Speedcafe.com.au V8 and F1 Race Race Guides are brought to you by our Platinum Partners IRWIN Tools, Orrcon Steel, Pirtek, Jack Daniel’s … and our brand-new partner Vodafone.