The Queensland team has an agreement in place with French World Touring Car driver Yvan Muller to partner Murphy, however, a change in the WTCC calendar earlier this year has seen the WTCC rounds sit either side of the L&H 500 at Phillip Island. That situation has made Muller’s Chevrolet team uncomfortable about his participation in the event.

The vacant role is set to be filled by Blanchard at Phillip Island, and possibly Bathurst too, after Blanchard’s solid debut in the Fujitsu V8 Series this year. After three rounds, he sits third in the series. 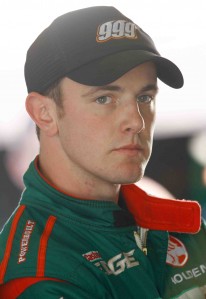 In the past few months, Blanchard has tested with PMM at Queensland Raceway, and drove Murphy’s Commodore VE in Winton’s endurance driver practice session.

Muller is confirmed to drive for Paul Morris Motorsport in the Armor All Gold Coast 600, where 18 international drivers will compete on the Surfers Paradise circuit with the regular V8 drivers.

Morris himself will drive the other PMM entry with Russell Ingall in the Supercheap Auto Commodore VE.

Morris told Speedcafe.com.au that his team will hold fire on a final call until after this weekend’s Fujitsu V8 round at Townsville.

“It’s starting to come together,” Morris said of the decision.

“Tim is looking more and more likely for Phillip Island at least, but we want to see how he goes this weekend.

“He went and had a run in Commodore Cup at Winton (two weeks ago) and he was right on the same pace with blokes like Steve Owen and Lee Holdsworth. He adapted to those cars really quick which was good.

“We might just see how he comes out of this weekend and make a decision.”

Morris acknowledged that Blanchard has produced solid results so far, but he needs to take the next step and be able to get more speed out of his Sonic Motor Racing-prepared Falcon.

“He’s just got to roll it out and get his head around the car,” he said.

“He’s at the stage now where they need to start swinging the spanners at it to make it faster. At Winton, it certainly had a lot of understeer, and I think he’s at the stage where he should to be able to tell them what he needs from it.

“Using the inexperience card isn’t going to cut it anymore, especially when you’re racing against guys like myself and Steve Owen. It’s just basic stuff. A spring change would have probably helped him. I’ll probably work with him over the weekend to try and help him where I can.”