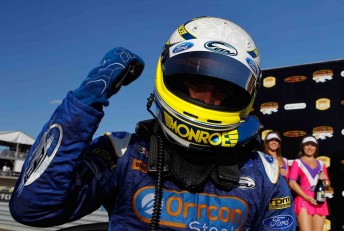 Ford Performance Racing team principal Tim Edwards says a raft of ‘go-fast’ bits for Townsville will be the key to keeping the factory Ford team in its winning form.

Orrcon Steel FPR driver Mark Winterbottom took his and the team’s first win of the season at the last round in Hidden Valley, and the team plans on continuing its quest to move ‘Frosty’ forward in the championship this weekend at the Sucrogen Townsville 400.

How does it plan on doing that? Edwards told Speedcafe.com.au that the addition of more new components for Townsville will put them in a position to vault Winterbottom beyond fifth place in the title.

“We’ve got some new bits for all the cars that will be good for us, and no, I’m not telling you what they are!” the coy Edwards said.

“There’s no such thing as ‘significant’ improvements to the cars these days. We had Frosty of pole position by 0.01s at Hidden Valley. We’re not looking for seconds, we’re looking for very small amounts. That’s all you’re ever going to do.

“I think what we’ve got is just another little step.”

Edwards admitted that further engine upgrades is just one of the updates in all three of the FPR Falcons.

“We’ve designed and manufactured a completely new driver cool suit and going into Townsville we will have a new engine upgrade … so we’ve hardly been taking it easy,” Edwards said.

“The result of our recent performance has been a combination of everything on the car working the way it should and the drivers being able to manage and channel the changes they need to get that extra tenth – something that since the Middle East has proved elusive.”

Winterbottom says that the car, built brand-new for the start of the 2010 season, is starting to come good at the right time of the year.

“A win in Darwin was exactly what we needed,” Frosty said.

“We’ve worked so hard this year to get things where they are now, and I’m really understanding the way it behaves. It’s far more predictable now which the way it should be so hopefully we’ll be up the front again this weekend.”