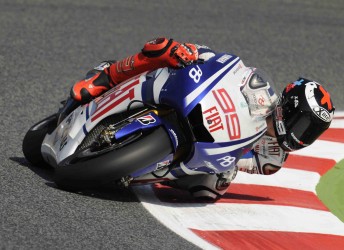 Home town driver Jorge Lorenzo stormed to his third-consecutive pole position at Catalunya in the Spanish Grand Prix, maintaining his dominance in the MotoGP championship.

The Fiat Yamaha rider’s best time of 1m42.046s ended up placing him 0.364s clear of Australian Casey Stoner, but only after top spot had changed hands a number of times.

Second position eventually went to Stoner after the Ducati Team rider overcame a dissatisfaction with his bike, running 19th in the latter stage of qualifying. Stoner seeming solved his issue and momentarily took pole with a time of 1m42.410s before Lorenzo hit back on his penultimate lap.

Completing the front row after another superb session will be Frenchman Randy de Puniet. The LCR Honda rider’s consistency throughout the session was impressive, leading the session until 10 minutes before the end when the battle heated up, eventually timing a further 0.102s behind Stoner to make it three front-row starts in succession.

Repsol Honda’s Dani Pedrosa also made a late surge and he climbed onto the front row for a few minutes before finishing fourth, just 0.08s off De Puniet in a breathless final few laps.

American Ben Spies also made a charge at the end of the session and improved his standing considerably, the Monster Yamaha Tech 3 rider following up an impressive day one practice with fifth place on the starting grid.

Andrea Dovizioso completed the second row as he took his Repsol Honda round in the sixth best time.

Aleix Espargaró (Pramac Racing) had finished the session in eighth, but his final lap was cancelled after the Race Director deemed he had cut the track between Turns 1 and 2, meaning his reclassified position was 12th.

The Gran Premi Aperol de Catalunya MotoGP race gets underway at 2pm local time on Sunday. For Australian viewers, coverage of the race starts at 9.30pm on ONE HD.