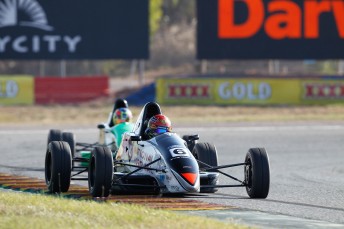 The Australian Formula Ford Championship has reset the age benchmark again, attracting the youngest competitor to the class for next weekend’s round at Townsville, Queensland.

Cassidy will be the youngest driver in all the classes that are racing at Townsville on July 9-11.

Cassidy will take over the reins of the car that has powered Adam Graham to multiple front row starts and podium finishes this year. Graham has been forced to sit out the Townsville event due to budgetary restraints and will be looking to re-launch his campaign in one of Evans Motorsport Groups Mygales at the Gold Coast round of the championship.

Cassidy is looking forward to working with the Evans team.

“I’m excited to be competing with Evans Motorsport Group. I’ve been keeping a close eye on their results so far this year and it’s been quite impressive for a new team,” he said.

Cassidy says that if not for an operation earlier in the year, he would have contested the whole championship.

“Josh and I were close to inking a deal at the start of this season, however I had to undergo surgery to my legs so it wasn’t possible,” he said.

Although Nick has not competed in Australia, nor experienced the extra power of the Duratec engine, team boss Josh Evans believes he will quickly be up to speed.

“I don’t think it will take him long to get familiar with his new machinery and surrounding,” said Evans.

“Even though he will be the youngest driver in the field, he has already demonstrated to us that he is quite mature and level-headed. Both of our ‘Young Guns’ Andre Heimgartner (14) and Mathew Hart (15), won on their debuts in the Victorian State Championship, so we believe we’ll be able to get him up to speed reasonably quickly.”