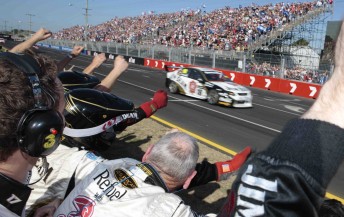 The Sucrogen Townsville 400 has released extra grandstand seating on the pit straight for next weekend’s Far North Queensland race meeting to cater for the high public demand.

This morning, tickets went on sale for an additional grandstand section that has been built in pit straight to meet demand from North Queensland residents wanting to be part of the region’s biggest annual event.

V8 Supercars is also giving people who have purchased a three-day general admission ticket, the opportunity to upgrade to a grandstand seat for just $88.

Sucrogen Townsville 400 Event Manager Kim Faithfull said that anticipation for the second-running of the event is peaking.

“V8 Supercar fever is mounting in North Queensland as the event draws closer and today we’re delighted to be announcing we are releasing tickets to a new grandstand section on pit straight to meet the demand,” he said.

“I would urge anyone who has not yet purchased their ticket to get in now and take advantage of the pre-purchase price as well as avoiding the queues at the event.

“Preparations at the Reid Park precinct are well on-track, with the Merchandise Alley taking shape and the support category area being finalised.

“Once Boundary Street is closed on Saturday night, we will see major activity over the coming days as workers and local contractors put in place the finishing touches ready for the event.”

The V8 Supercars will feature in two, 200km races on the Saturday and Sunday, and on Friday will hit the track for practice sessions and qualifying.

The Fujitsu V8 Supercars, the MINI Challenge, Formula Fords and the V8 Utes will also feature in the action on the track.

For families, the Sucrogen Townsville 400 is this year introducing the V.I.K. Pass – Very Important Kids – where all kids under 12 can receive free entry with a full paying adult.

“We urge families to take the time to redeem their V.I.K. coupons for tickets this week before the event to prevent waiting in line,” Faithful said.

“Families simply have to cut out the coupon from the Townsville Bulletin and take it to a Ticketek outlet and exchange it for a free ticket.”

Tickets are available through www.ticketek.com.au or 132 849.