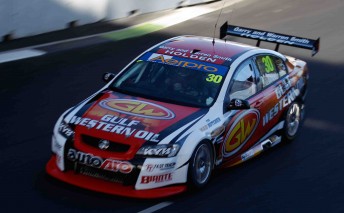 The Gulf Western Oils Commodore VE will be driven by Cameron McConville at Townsville, before Mark Noske and Nathan Pretty jump in for the endurance races

Rookie V8 Supercars team owner Lucas Dumbrell has stated that his team needed a change of drivers to accelerate its learning process.

It was confirmed today that Cameron McConville will replace Daniel Gaunt at the Sucrogen Townsville 4000 next weekend.

Also confirmed is that experienced enduro drivers Mark Noske and Nathan Pretty will drive the #30 Gulf Western Oils-backed Commodore VE in the following two events – the L&H 500 at Phillip Island and the Supercheap Auto Bathurst 1000.

Dumbrell said he was making the change to bring more experience to his team and accelerate its move up the grid.

“This year has been hectic, an incredible experience for me and my young team,” Dumbrell said.

“We have finished every race which is pleasing, but I am constantly learning what a race team needs – and that for us at this point in time is drivers with experience.

“I would like to thank Daniel for his efforts and we wish him all the best with his future endeavors.”

McConville retired from full-time driving at the conclusion of the 2009 season. He stepped into the Fujitsu V8 Series with backing from Jax Quickfit Tyres at Winton in May, winning the round. He was scheduled to drive that car again at Townsville, but has handed the keys to Craig Baird, allowing McConville to contest the Main Series round in the Gulf Western Oils Commodore.

“I’ve had itchy feet to drive again since the round at Abu Dhabi last February.

“I am under no illusions though, as the short time I have been out of V8 Supercars it has again risen to another level.”

McConville is signed to drive for the Toll Holden Racing Team in the L&H 500 and the Supercheap Auto Bathurst 1000. Baird is also signed by the Walkinshaw Racing organisation and is expected to drive for the Bundaberg Red Racing Commodore VEs.

The news means that every Walkinshaw Racing-contracted driver (except Ryan Briscoe) will be racing at Townsville this weekend.

Check out McConville on ONE HD’s Sports Tonight