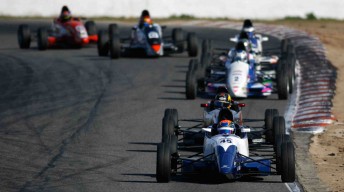 The Genuine Ford Parts Australian Formula Ford Championship will be broadcast on New Zealand television for the first time.

Free-to-air channel TV3 will broadcast Rounds 2 through to 7 of the championship, beginning on Sunday July 18 with the combined Round 2 and 3 show.

The deal comes on the back of an increased presence of New Zealand drivers in the Championship, with no fewer than four Kiwis competing over the past two years.

“We’re incredibly pleased to be able to announce that the Australian Formula Ford Championship will be broadcast in New Zealand thanks to TV3,” category manager Margaret Hardy said.

“We have seen an increased number of New Zealand drivers competing in the series over the past few years, which has no doubt boosted the level of interest over there.

“This is also an important step commercially for New Zealand drivers who are seeking local sponsorship back home.”

The New Zealand championship has recently introduced the Fiesta engine, which is used in Australia, and while the series will have two classes this year, it is hoped that the TV deal will stimulate interest amongst local competitors in upgrading to the Fiesta for their competition.

The next round of the Genuine Ford Parts Australian Formula Ford Championship will take place next weekend at the Townsville Street Circuit.