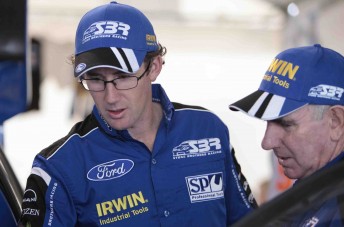 Van Gisbergen will complete the maximum of 10 laps tomorrow morning before handing the car over to McIntyre for the rest of the day.

Each V8 Supercars team gets two driver evaluation days allocated to them each year. Tomorrow’s test is Stone Brothers Racing’s first for the year, with the second day pencilled in to give Alex Davison’s IRWIN Racing team-mate David Brabham a full day on September 2.

Team owner Ross Stone told Speedcafe.com.au that McIntyre continues to impress him every time he jumps in the car.

“There’s a couple of reasons why we chose Johnny as our driver,” Stone explained.

“As far as his driving goes, he’s got really good feel and has a good idea on car set-up, similar to Shane’s feedback.

“The other thing is that he fits into the car perfectly. You can’t run seat runners, so there can’t be any compromises on steering wheel height or seat location, so that makes it so much easier for that entry.

“And the evaluation day also gives him an opportunity to do some pit stop practice and all that sort of stuff.”

McIntyre is in his fourth-consecutive year as an SBR endurance driver, and Stone says that the respected Kiwi is a pleasure to work with.

“We try and keep the laps up for him so we can roll him on year on year,” he said.

“We enjoy working with him. He’s a good operator, a good bloke all round and dedicated to his racing.”

Stone says that he’d like to see McIntyre race full-time in V8 Supercars on day.

“I think he’s one of the guys who if he got a gig, could go straight into the Main Series,” he said.

“I’m a big believer in that drivers need to run in the Fujitsu Series first, but if you look at the lap times from the rookie sessions at Queensland Raceway and Winton, he was pretty quick. I think he’d quite easily slot into the Main Series.”

Also at the evaluation day will be SBR’s Fujitsu V8 Series entry of Scott McLaughlin, who will get more laps in his Fujitsu-backed Falcon BF.