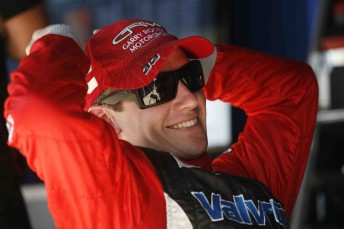 Bowe, a two-time Bathurst 1000 winner, says that the factory Holden team needs a driver like Holdsworth – and Holdsworth needs a team like HRT.

“The Holden Racing Team should buy him tomorrow – whatever the cost, and he should go too.

“To win championships you have to be in a top team, full stop.”

Bowe’s thoughts might not be that unrealistic. The Toll Holden Racing Team is yet to sign a driver for the #22 HRT Commodore next year, with current driver Will Davison a free agent at the end of the season.

Holdsworth appreciates Bowe’s glowing praise, but says he is confident that he will remain loyal to his current team Garry Rogers Motorsport, which he has a driving contract for until the end of 2011.

“To have him sing those praises is a huge thing for me and I really appreciate his thoughts,” Holdsworth told Speedcafe.com.au.

“I’ve known John for a long time now and I often go to him for a bit of advice. I highly respect whatever he has to offer.

“I’ve got a deal with Garry until the end of next year and I’m hoping that we can continue to move forward at GRM.

“Driving for HRT next year is probably unlikely. I’d like to remain loyal to Garry and do the best job I can for GRM while I’m driving for him.”

For more with Holdsworth, CLICK HERE for today’s Café Chat