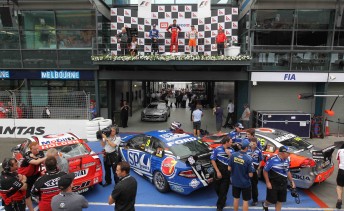 The podium at the Australian Grand Prix this year

V8 Supercars new race deal at the Australian Grand Prix has delivered everything that the teams, drivers and fans wanted – except championship points.

Due to the rival Australian networks contracted to broadcasting V8 Supercars and Formula One, championship points has not been achievable.

Many sports across the world have different broadcasters for the same competition, including NASCAR and IndyCar in America, and on a local front, the AFL.

V8 Supercars Chief Executive Officer Martin Whitaker said that while he’d like to see the teams and drivers compete for points at the Grand Prix, the main goal of producing “proper racing” at the Grand Prix has been achieved.

“It’s one of the things we’d love to have,” Whitaker said regarding championship points.

“Clearly one of the issues in terms of running at the Grand Prix is the television coverage, and it makes it difficult to have championship points.

“I’m not too worried about the championship points at this point. It’s just great for us to be at the Australian Grand Prix.”