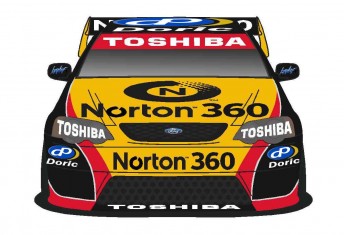 The door and window hardware manufacturer has teamed up with Moffat for the remainder of this year’s Fujitsu Series, his co-drives with Ford Performance Racing in the Phillip Island & Bathurst endurance events, as well as his 2011 season.

The announcement comes on the back of a broader spread of Doric’s involvement in Australian Motorsport in 2010, with Moffat joining Tim Slade, John Bowe and Team Motologic Ducati as part of the Doric Racing family.

Doric signage will be carried prominently on Moffat’s Norton 360 Ford Rising Stars Falcon from the Townsville round of the championship, on July 9-13. Doric joins Norton 360, Toshiba, Biante and Boylan Traffic Solutions as supporters of Moffat’s Fujitsu Series program.

“I am delighted to welcome Doric on board for the rest of this season, I hope it is the start of a long and successful partnership,” Moffat said.

“My immediate aim is to get back to my front running form in Townsville, and repay the faith that Norton, Toshiba, Biante, Boylan and now Doric are showing in me. I’m looking forward to enjoying some success in the remainder of the year and to be able to share that with Doric.”

Doric General Manager Nigel Long is pleased to be able to step in and shore up Moffat’s 2010 program.

“Everyone at Doric is excited about the announcement that we will be supporting James Moffat for the remainder of the 2010 season, including the long-distance races with FPR,” Long said.

“James has proved over the past couple of years that he has a big future in V8 Supercars, and we’re proud to be able to help him realise that potential.”

Doric has a rich history in Australian motorsport beginning in 2004 with the Rupprecht Motorsports team. In 2005 Doric had formed a partnership with PCR and Team Principal Paul Cruickshank, which continues for a sixth year in 2010.