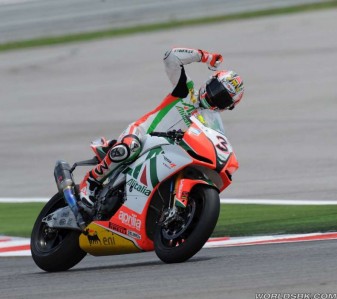 Max Biaggi (Aprilia Alitalia) continued his outstanding form of 2010 by taking his fourth double win of the year at the San Marino World Superbike round at Misano to move further ahead in the championship standings.

In front of 69,000 fans Biaggi took his seventh win of the season in race 1, finally overtaking long time leader, Australia’s Troy Corser (BMW Motorrad Motorsport) and then held off Carlos Checa (Althea Ducati) in the final laps. Checa was second, Corser third, the top three veteran riders covered by only 0.822 seconds at the flag.

“Especially because I didn’t expect it and because doing so well in Italy, in front of our supporters has a very special flavour for us.

“The conditions are difficult because of the lack of grip. Already after five or six laps I started to “drift”. After overtaking Troy I tried to push as hard as possible because I saw that the times were still high, but I couldn’t shake him or Checa because the risk for mistakes was too high.”

Biaggi was in unbeatable form in race 2, surviving some hard early passing moves by his main rivals to get clear of the pack and push on to win, easing up across the line, by 4.095 seconds. This was double number four for the season. Haslam was a committed second after changing his machine and rear tyre as he attempted to halt Biaggi’s championship surge. Fabrizio returned to some of his best form by going third, holding off the determined Cal Crutchlow (Yamaha Sterilgarda).

“In such a tough and well balanced championship, all of the victories are earned with hard work and sweat,” said Biaggi.

“In race 2, to be honest, maybe I rode… pushing the envelope a bit, maybe even risking too much. But on the other hand, without risk there is no gain!

“This race represents a crucial moment for us and for our season we are coming out with our heads held high.”

Checa was fifth after being ambushed in the early laps, Guintoli sixth and Byrne seventh. Luca Scassa was an impressive eighth for the local Supersonic Ducati Team, with Haga ninth and early leader Corser tenth after losing ten seconds in one lap.

The next outing for the World Superbike Championship will be at Brno in the Czech Republic on July 11.

World Superbike Championship after 8 of 13 rounds