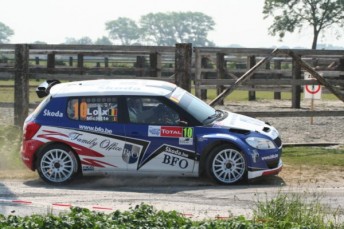 Freddy Loix on his way to winning the Geko Ypres Rally

Driving for Škoda Motorsport for the first time, the Belgian was cheered-on through Saturday’s 13 sun-coated special stages by tens of thousands of adoring fans, who lined the demanding all-asphalt route.

Loix started day two with a slender 5.8-second lead over Peugeot UK’s Kris Meeke, last year’s Ypres winner and the defending IRC champion. But what was shaping up to be a repeat of the pair’s epic battle in Belgium 12 months previously ended when Meeke suffered a spectacular high-speed roll on Saturday’s second stage.

With runaway IRC title leader Juho Hänninen crashing into retirement on Friday evening, Meeke was desperate to make the most of the Finn’s early exit by taking his second win of 2010. But it all went awry for the Northern Irishman when he lost control on the exit of a fast right-hander two kilometres into the stage, clipped a bank and rolled. Fortunately both Meeke and co-driver Paul Nagle were uninjured but the crash marked their fourth retirement of the season.

“It was a mistake with the pacenote,” said Meeke, who began day two of the rally by claiming his third fastest stage time.

“We turned in a little too early and ran out of room on the exit of the corner. When you’re pushing like we were that kind of thing can happen.”

Although Meeke’s crash took the pressure off Loix, the 39-year-old rued his rival’s retirement as it meant he had to adopt a less attacking style while also maintaining his concentration by driving at a similar pace for the remainder of the leg, which covered more than 190 competitive kilometres. Apart from a minor brake glitch, little troubled the driver affectionately known as Fast Freddy, whose win was Škoda’s fourth in the IRC in 2010 and its first with the facelift Fabia.

Meeke’s departure handed second place to Jan Kopecký, who has closed to within three points of Hanninen at the top of the title standings with six rounds remaining.

The next event in the IRC will be the Sata Rally Açores in Portugal on 15-17 July.

IRC Drivers’ Championship after 6 of 12 rounds

IRC Manufacturers’ Championship after 6 of 12 rounds