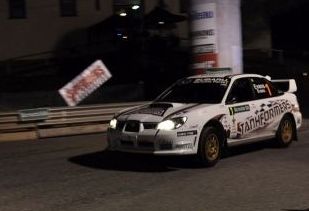 Simon Evans has won Heat #1 of the Scouts Rally SA

Simon Evans in the Tanksformers Subaru has won the opening heat of the Scouts Rally SA after a consistent and clever performance in the rolling hills of the Barossa Valley.

Along with co-driver, wife Sue, Evans stretched his lead throughout the day to as much as 22-seconds over Scott Pedder in the Pedder’s Suspension Rally Team Mitsubishi.

Despite a fightback from Pedder and co-driver Jon Mortimer, the gap proved too large. Importantly they scored stage wins which could prove decisive in the final results if they can break through tomorrow and win that heat. In that sitiatation the overall victory will be awarded to the crew with the most stage wins.

It was an outstanding performance by the Tankformers crew. Despite being gifted 12-seconds after a wrong-turn by Pedder on the opening Friday night stage, Evans won by more than that margin, once again proving he is the class of the field in Australian rallying.

At the lunchtime service, Simon Evans was prepared to admit that his 20+ second lead was “handy” as he would now be able to just back off a little to preserve the car and ensure the pressure remained on Scott Pedder who, despite normally being unflappable, has displayed a few frayed edges of late.

Third place for the heat went to Active Rallysport’s Justin Dowell and co driver Matt Lee. It was a great return to the ARC after missing the recent Coffs event. Some gearbox issues troubled them during the day, but were not enough to stop them taking third for the heat.

Despite battling a misfire that shook the car and limited top speed, Eli Evans and Glen Weston in the Evans Motorsport Honda Civic Type R were able to not only complete the heat, but finish inside the top five and be first front wheel drive car home.