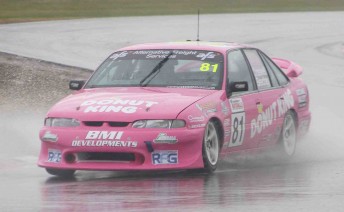 The opening mini-endurance race for the Commodore Cup National Series at Winton Motor Raceway ended in drama today during the fifth round of the 2010 Shannons Nationals Motor Racing Championships.

Adam Beechey and Dean Crosswell were awarded the race win after the 45minute race, with a mid-race Safety Car scrambling the field.

The field was spread at the start when the car of Ross McGregor was turned around at the first corner, sending Scott Andrews/Tim Shaw and Nick Parker/Darren Hossack for a ride through the sodden outfield.

McGregor shared driving duties with Steve Owen, who until the race had topped every practice and qualifying session he contested.

The combination of Brett and Lee Holdsworth led away, pitting early for the first of their two compulsory stops.

The Safety Car was deployed at mid-race distance when the Chris Stevenson/Kane Millier car lost a wheel and crashed on the pit straight, with the Holdsworth crew using the opportunity to duck into the pits for their second stop.

However, they were held at the pit exit, and later Holdsworth was trapped as the first car behind the Safety Car, a situation which was not re-addressed prior to the commencement of racing.

At the conclusion of the race, the Holdsworth brothers were classified in seventh.

The drama didn’t end there, with successive race leaders Marcus Zukanovic/Gerard McLeod and the car of Adam Lloyd/Ryan McLeod both taking the outfield at turn one on consecutive laps.

Crosswell drove hard to the finish, leading home the Lloyd/McLeod car, and the surprised combo of Matthew Hayes and Ryan Millier in third, the first of the VH Commodores across the line.

“It was a bit of a shock, especially after the chaos on the first laps,” Beechey said post-race.

“We changed the car a bit, and it definitely had more race pace.

“The strategy we used was great, pitting twice under the safety car, and with the result I should now be back on top (of the series standings).

“(The other competitors) are spitting chips because things didn’t go their way, but we had a bit of luck today for a change.”

Chris Smerdon came back for fourth at the finish after early dramas, while Terry Wyhoon fell out of the running after a solid start to the race.

Justin Levis was second in his Lotus Elise HPE, ahead of the lightning quick Stahl Cobra or Paul Crocitti.

Racing tomorrow for the class will feature another sprint race for the second drivers, and a one hour long endurance event.

Bruce Heinrich walked away from the HQ Holden field in their first race for the weekend, with a photo finish needed to split eventual second and third place finishers, Rod Rattjes and Spud Wood.

Reigning champion Shawn Jamieson picked up pole for the first of three Australian Saloon Car series races tomorrow, topping the time sheets in both of the qualifying sessions.

Racing commences tomorrow at 9:15am, with categories including the second Commodore Cup mini-enduro, as well as the Dallas Crane HQ Holden Challenge.