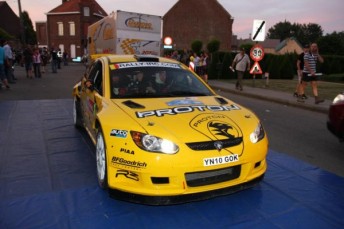 Chris Atkinson out early of the Ypres Rally

Australia’s Chris Atkinson has retired his Proton Satria Super 2000 from the Geko Ypres Rally in Belgium on just the fourth stage of the Intercontinental Rally Challenge (IRC) event.

In a horror scenario for the Malaysian manufacturer, team-mate Alister McRae and the semi-works Satria of young Briton Tom Cave all stopped with engine failures on the same stage. None of the trio will restart on Saturday.

Belgium’s Freddy Loix is on course for his sixth Ypres Rally victory after completing Friday’s opening leg with a lead of 5.8 seconds over last year’s winner Kris Meeke.

However, there will be no chance of a sixth consecutive podium finish for Intercontinental Rally Challenge leader Juho Hänninen after the works Skoda Motorsport driver slid into a ditch on the day’s fourth stage and got stuck, retiring from the event in the process.

Hänninen’s exit has turned the race for the IRC title on its head with Peugeot UK’s Meeke and works Skoda team-mate Jan Kopecký poised to capitalise in second and third places respectively. However, neither driver has been able to check Loix’s impressive progress on his first appearance in the IRC this season.

Loix, cheered on by thousands of enthusiastic spectators, won four of the day’s six sun-baked stages on his first outing with the factory Škoda squad, which is running its facelift Fabia for the first time in Belgium. According to the 39-year-old, the car’s wider track has enhanced its stability in fast corners, which he said has given him a “perfect feeling” on the technically demanding asphalt stages.

Friday’s opening stage proved troublesome for several crews including Toshi Arai and Stéphane Sarrazin. Sarrazin failed to complete the run after a puncture caused him to slide off into a ditch on a right-hand bend five kilometres into the test, where his Peugeot 207 became stranded. Arai spun his Subaru Impreza on a square left junction and, in his efforts to get pointed in the right direction; he inadvertently slid into a ditch but fortunately managed to regain the road, albeit with a delay of almost 10 minutes.