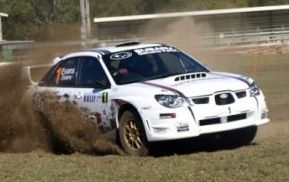 Simon Evans on his way to victory at Coffs Harbour

Along with wife Sue, Evans won both heats in Coffs Harbour to establish a 17-point lead over rival Scott Pedder.

The South Australian event is round #4 of 6 in the 2010 championship hunt and is regarded as the fastest event on the calendar.

His first win came in 2007 at the wheel of a Toyota Corolla Sportivo Group N (Prototype). In 2008, Evans remained in a Corolla – however he lost the turbocharger and half the torque output from the previous year at the wheel of the lighter S2000 version. Last year, Evans switched to a Mitsubishi Lancer Evo IX to claim his third straight Rally SA title, on his way to his third ARC title in four seasons.

It is a different car again for 2010, with Evans piloting the Tankformers Subaru Impreza WRX STI.

“Obviously we seem to have a reasonable handle on what it takes to be quick at Rally SA,” said Evans.

“The Subaru is a new car for us with a different set of challenges – it has different strengths and weaknesses again to what we have been used to in recent years.

“The roads are extremely technical – probably the most technical in the championship – and have quite a lot of grip, so it is a very enjoyable place to drive.

“Traditionally, the Barossa Valley has achieved the biggest crowds in the ARC, which adds another fantastic element to the event.

“Ringing the neck of a rally car in front of thousands of people in the Mount Crawford stages is one of the biggest thrills in Australian rallying.

“Sue thinks that I try to get a little bit more sideways and show off a bit in front of the crowds – I would never admit to that, but she is probably right.”

The Scouts Rally SA takes place in the Barossa Valley from tomorrow through to Sunday.