Ambrose has admitted that he was switching his engine off at every caution period throughout the 110-lap race to save fuel, with the #47 Toyota Camry not achieving the necessary fuel mileage.

As a result, Ambrose switched the engine off under the caution with seven laps remaining, but a combination of factors led to the engine not re-firing immediately, allowing six cars to pass as he came to a stop as the Australian struggled to restart his car.

“We were conserving fuel from the start because our fuel mileage numbers were not where they needed to be,” said Ambrose.

“We were good to go to the end, except for a green-white-checker finish.

“The only way we thought we would lose the race was fuel mileage. I’m not blaming NASCAR. I put myself in a bad situation. It was their judgment call and it is their house and their rules.”

“With the engine not firing again, it was a combination of things.

“The engine was hot, the fuel was sloshing around, we were on a hill and you can’t control the way the fuel flows through the carburetor. It was the first time it happened.”

Ambrose’s crew chief Frank Kerr says that the team is unsure as to why the car failed to restart on that fateful lap, with Ambrose having performed the ‘coasting’ routine to save fuel all race long during caution periods.

“It’s a lesson learned and it will make our team stronger,” said Kerr.

“We went there with a plan and stuck with it. At the end of the race, we had the best car.

“We had been shutting the motor off every yellow to make sure we had enough fuel. It was a routine that we had done the whole race. 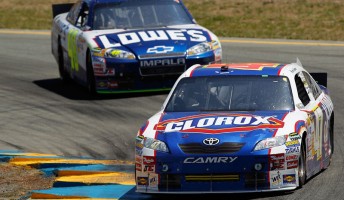 “Not sure what happened going up the hill and why it did that. It just wouldn’t start back up. We were trying to make sure we were there at the end if we were faced with green-white-checkers.

“It’s just unfortunate and we have to learn from it and go on to Loudon.”

Ambrose is still smarting from the costly error as the Sprint Cup Series heads back to oval competition with the Lenox Industrial Tools 301 at New Hampshire this weekend.

“It stinks that we gave away our first victory,” said Ambrose.

“Leading the race, I turned the motor off under caution and couldn’t get it cranked back up.

“I gave away a golden opportunity with an unforced error – my error.

“I’ve learned from it. Sure, it makes you wonder who I need to be or what I need to do better. When you trip over yourself like that, it’s easy to get depressed and get bogged down with the pressures of racing.

“But, the way I look at it, I’ve got to keep going. It’s just a race and there’s one this weekend to look forward too. I’ve just got to stay relaxed, focused and remember what is important.”

Ambrose gave credit to his team for their performance throughout the race, which he would have almost certainly won if not for the late-race error.

“I’m just really proud of my team to see them stand up like they did on Sunday,” said Ambrose.

“Jimmie Johnson was faster than us at the start of the race, but my guys worked on the car and made it better than the No. 48 machine at the end of the race. They delivered on pit road and put us ahead of Jimmie out of the pits. We were able to put a gap between us and pull away.”

“We’re not disappointed – – there’s something wrong if you are disappointed with a sixth-place finish in the NASCAR Sprint Cup Series,” said Daugherty.

“We are happy with Marcos and tickled that he is driving for us. Marcos is an outstanding driver and I’m surprised he hasn’t already won a race.

“We’ve watched him excel at places like Bristol Motor Speedway, Talladega Superspeedway and other tracks. He’s going to win one soon.”