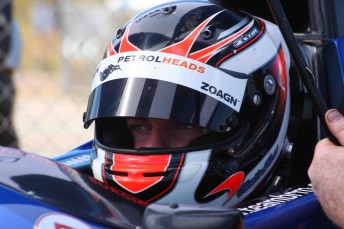 Barker, 18, currently sits third in the Formula 3 Australian Drivers Championship and recently won all three races at Mallala Raceway near Adelaide – his first wins in the category – but will step into a Team BRM Mygale at Townsville to replace regular driver Martin Short.

Short, a regular top 10 runner in this years’ championship, has been forced to the sidelines due to a funding shortfall. Barker will in the North Queensland round in two weeks time, with the possibility of more races in the future.

It will be Barker’s debut in the Australian Formula Ford title, although not his first race meeting in a Formula Ford. Barker was a race winner in last year’s ultra-competitive British championship and also finished fourth in the Formula Ford Festival at Brands Hatch before moving down under to step up to ‘wings and slicks’ racing.

The lanky Brit said he was looking forward to getting on track for his street circuit debut.

“I can’t wait, it’s going to be good fun to get back in a Formula Ford and race on a street circuit for the first time,” said Barker.

“The Australian cars are slightly different to the ones I am used to, with the main difference being down to the grooved tyres compared to the slicks in Europe, but I’m hoping that I remember how to drive the cars and get back in the groove quickly.

“I’m basically just going to go out there and drive the car as hard as I possibly can!”

With his ambitions set on a V8 Supercar drive, Barker’s Townsville foray will also enable him to show his wares to the watching V8 Supercar paddock for the first time amidst a competitive Formula Ford grid.

The driver switch comes after Team BRM posted a strong performance last weekend in Darwin, with both Short and South Australian rookie Tom Goess racing their way into the top 10 by the final race despite a drama-filled weekend.

Goess qualified only 18th in Darwin but starred across the weekend as he posted finishes of 15th, 11th before a strong eighth in the finale – a career best finish for the 17-year-old.

“We’re obviously disappointed that Martin will be unable to race with us in Townsville,” Team BRM Manager Mark Rundle said.

“Both he and Tom were making great progress and the results at Hidden Valley, in Race 3 in particular, showed that we are getting them closer to the front.

“We are in a good position to be able to bring Ben across from the Formula 3 programme and get him in a car for Townsville. He has a lot of Formula Ford experience and knows the cars well so he is the perfect replacement.”

The Townsville street race will be held on July 9 – 11.