The cameras pointing out the front windscreen of the car

The pair of ‘Go Pro’ cameras were trialed in three different positions inside Will Davison’s Toll Holden Racing Team Commodore VE – on the dash, looking up at Davison on the driver’s side of the car and looking over his shoulder on the passenger’s side.

Davison’s car was selected because the inside of the chassis is painted white, giving the TV professionals a better understanding of its output quality.

The #22 Toll HRT Commodore will again run the new technology at Townsville in three weeks time where they will try to do a world-first live transmission. 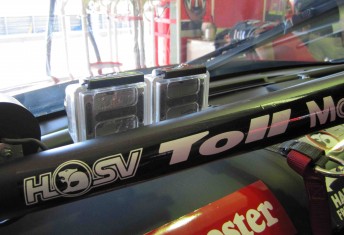 It takes two cameras to create the 3D TV images

The idea behind these trials is for a possible full-on debut at the Bathurst 1000 on the Seven Network’s 3D channel.

V8 Supercars Television executive producer Murray Lomax told Speedcafe.com.au that there has been challenges involved in the trials.

“We’re relearning how to do TV – it’s a completely different approach,” he said.

“It is a world first, so its something that we’re learning as we go.

“From the V8 Supercars Board, we keep getting questions about how it works and what you do, and 99 percent of the questions can’t be answered. It makes me look like a bit of a fool! It’s all new. There’s not much we can do until we learn the process, and that’s what we’re doing at the moment.

“Hopefully we can get enough positives out of this weekend so we can take the next step forward for Townsville.”

Lomax says that the equipment used at Hidden Valley isn’t the perfect solution.

“There’s a few other bits and pieces of equipment that are not yet available, and nothing has been made small enough – that’s one of the real difficulties.”

It is hoped that if all the trials are successful, 3D cameras will be used in a number of cars at Bathurst, plus a few trackside cameras.

You can’t watch 3D television on a regular TV station. The State of Origin Rugby League matches were available on Channel 40, as long as you own a 3D TV (and a funky pair of glasses!).