More Sprint tyres to be raced in 2011

More Sprint tyres to be raced in 2011 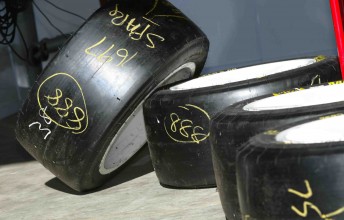 Sprint tyre compounds might be used a lot more next year

V8 Supercars could be in line for a major injection of the softer Dunlop ‘Sprint’ tyres next year.

There is a good chance that V8 Supercars Australia will implement the Sprint tyres for all of the permanent circuits next year, like they were used at Queensland Raceway and Winton Motor Raceway recently.

The soft tyres could be used on a full-time basis at Symmons Plains, Winton, Queensland Raceway, Hidden Valley, Sandown and Barbagallo, if the category makes its expected return.

Circuits that might see the Sprint tyres used are Abu Dhabi, Bahrain, Townsville and Hamilton, while tracks that definitely won’t use Sprints are the Clipsal 500, Phillip Island 500, Bathurst 1000 and the Sydney Telstra 500. Those circuits will remain on the standard control tyre.

The introduction of the softer compound rubber have been a huge success so far, with increased passing and better racing produced thanks to the increased grip.

Thus far, no negative side affects (ie; increased unreliability with the cars) have been seen with their use.

According to Dunlop motorsport manager Kevin Fitzsimons, V8 Supercars will need to decide by August the exact compound allocation the series will need for 2011.

“I place the orders with Japan, which I have to forecast six months in advance. They order the materials about three months out,” he told Speedcafe.com.au.

“We need to know definitely, in concrete, by the end of August so they can put a quick order in to get some materials to go into production by late November early December so the tyres can be in the Middle East by mid-February.”

Fitzsimons said that the V8 Supercars production scheduled is already locked in, however, the compound allocation needs to be sorted as the soft tyres are created out of materials from Europe, while the hard control tyres have their materials sourced from Japan.

Fitzsimons says that the soft tyre would suit every permanent track, although he did raise a question over Townsville.

“I believe the soft tyre would cope at all of the permanent circuits that we go to,” he said.

“Townsville may be a question mark as it could be a bit hard on the left rear, but if they have the right quantities of the tyre, it could be OK. If they have 20 tyres instead of 16, it would be fine – and they’ve got the option of putting the right front over to the left rear in the pit stop like they did at Winton.”

Hidden Valley race winner Jamie Whincup said that a combination of full-time Sprint tyre races and control tyre rounds is a good balance for the championship.

“Hidden Valley would be tough. Tassie would be easy. I think we could probably just scrape through at Hidden Valley, but you couldn’t do it at Clipsal and the enduros. We have to have the control tyre.”