Jorge Lorenzo was the runaway winner of the British Grand Prix at Silverstone, taking a commanding victory for the Fiat Yamaha Team.

With the hottest track temperature of the weekend, Lorenzo used his softer option front and rear slicks to good effect, setting a fast and consistent pace throughout and the fastest lap of the race which becomes a new lap record at the new circuit.

The win has increased his lead in the world championship over Andrea Dovizioso to 43 points, making Lorenzo the clear world title favourite after his team-mate Valentino Rossi sits on the sidelines with his broken leg. 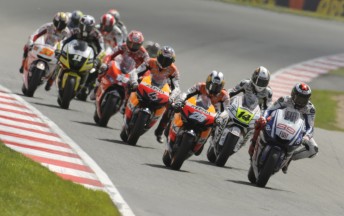 Lorenzo leads the pack at Silverstone

Interestingly, Rossi’s renowned chief engineer Jeremy Burgess said last night on ONE HD’s coverage of the British Grand Prix that Rossi could be back earlier than expected. The Australian engineer told ONE HD’s Greg Rust and Daryl Beattie that the German GP at the Sachsenring (July 18) is an expected, although not locked in, return date.

It would mean that Rossi would miss a total of four races due to the injuries he sustained at the Italian Grand Prix.

Lorenzo said he had a feeling about a good result before the race.

“Today was a very important day for us, for the race win and also for the championship,” he said.

“It was difficult to go fast at the beginning and I had to be very concentrated not to make a mistake. The rear tyre was sliding and I was just enjoying myself and focusing on my race. I had a different feeling today that said to me it could be a good day.”

Behind Lorenzo at Silverstone, the battle for the podium was intense as Repsol Honda’s Dovizioso pushed hard on his softer slicks to stay ahead of Ben Spies of Monster Yamaha Tech3, who scored his first MotoGP podium, and the Ducati Team duo of Nicky Hayden and Casey Stoner. The four were split by less than a second entering the final lap.