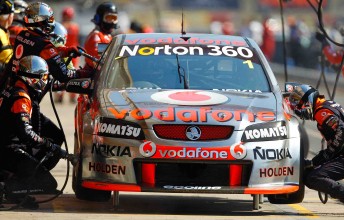 A Dunlop tyre compound drama was uncovered at Hidden Valley Raceway this weekend.

Two different types of compounds were released to the teams as ‘test’ tyres – one at the start of the year, the other just recently.

The tyres that were distributed can be used at anytime.

Each team was given the option of collecting two sets of test tyres at the start of the year, which have since been found to produce a poorer performance than the most recent set of test tyres that were distributed this month.

“We were on the receiving end of those little issues,” he said.

“We were forced to only put two tyres on at the last stop where we had two brand-new ones there that were ready to go, but they were just duds. We can’t use them.”

The front tyres on Whincup’s car in today’s race ended up doing 47 laps.

Whincup’s engineer Mark Dutton said that the situation could have been avoided with better communication.

“The frustrating thing was that it was known before we came up,” he said.

“If we were told before we came up, we could have done something about it because we had some newer test tyres turn up. Generally you want to get rid of your older ones first. It could have been a non-issue for everyone.”

Furthermore, all four of Kelly Racing’s drivers were affected by the situation over the weekend.

Dunlop Motorsport manager Kevin Fitzsimons would not make official comment until he raised the matter with Dunlop’s manufacturing plant in Japan.