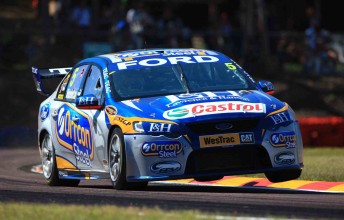 Winterbottom leaped from fifth place to take the top spot after a faultles lap around the 2.9km circuit.

Reigning V8 Championship Jamie Whincup will start alongside Winterbottom in his brand-new TeamVodafone Commodore VE ahead of the man who raised the most eyebrows in the session – Tim Slade. The Wilson Security Racing Falcon driver advanced from provisional seventh to third, making it his best qualifying performance of his 18 month V8 career. It was Slade’s first-ever shootout appearance.

Toll Holden Racing Team’s Garth Tander and Jack Daniel’s Racing’s Todd Kelly made ground in the shootout and will start fourth and fifth.

Craig Lowndes was the one of the biggest losers of the session, dropping from provisional fourth to ninth after a couple of small errors in his TeamVodofne Commodore VE compromised his lap.

Worse though for Team BOC’s Jason Richards, who went from the penthouse to the outhouse in the session, dropping from provisional first to 10th. The New Zealander lost two tenths of a second in the first sector after dropping a wheel in the dirt on the exit of turn one and spent the rest of the lap trying to recover, which had a negative affect.

Race 13 of the V8 Supercars Championship Series will start at 3:30pm (NT time).