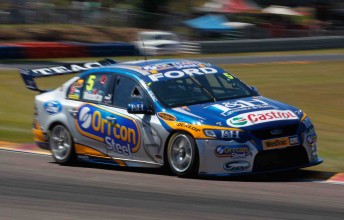 Mark Winterbottom has won the first race of the Skycity Triple Crown at Hidden Valley Raceway this afternoon.

The Orrcon Steel Ford Performance Racing Falcon FG won the start and led every lap of the race, bar the pit stop cycle.

It is Winterbottom’s first win in the V8 Supercars Championship Series since last year’s Gold Coast street race in October.

Winterbottom celebrated by jumping on the roof of his Orrcon Steel Falcon.

TeamVodafone’s Jamie Whincup finished second and applied some pressure to Winterbottom during certain points of the race, but couldn’t do enough to have a shot at passing him.

Four place went to Team BOC’s Jason Richards. It was a good comeback by the Kiwi, who had earlier muffed his Top 10 shootout lap, dropping from provisional pole to 10th.  Richards’ result was helped by a great pit strategy by the Brad Jones Racing team who brought him in early, avoiding the mid-race dicing and setting some quick times once he got back out on the circuit.

Rounding out the top 10 was Craig Lowndes (TeamVodafone), Paul Dumbrell (The Bottle-O Racing), Todd Kelly (Jack Daniel’s Racing) and Garth Tander (Toll HRT). Tander was running third in the opening stages but was compromised by an off-track excursion at turn one.

In the bad luck column was Will Davison, whose disastrous season continued when his brand-new Toll HRT Commodore stuck in third gear at the start of the race. A quick pit stop fixed the issue, but completed the race many laps down.

Qualifying for tomorrow’s 14th race of the V8 Supercars Championship Series kicks off 12pm, followed by the race at 2.35pm.