Frosty: I could have gone even faster

Frosty: I could have gone even faster 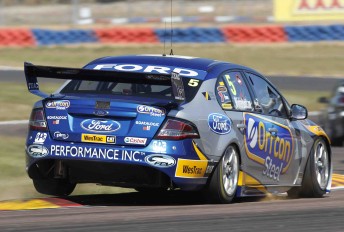 Mark Winterbottom says that he could have gone faster during his scorching pole position lap in today’s top 10 shootout at Hidden Valley.

Winterbottom says that he apologised to his team for a missed gear that he thought was going to cost him the top spot.

“I caught a gear coming out of turn one which I think cost me quite a bit of time so I apologise to everyone that I didn’t go even quicker,” he said.

“We’ve been given a pretty hard time lately with respect to where we’re heading and I’ve always said you shouldn’t write us off just yet.

“While it did take us longer than we would have hoped to enjoy this sort of pace, our recent tests indicated that we’d soon be back up the pointy end.

“It’s still early days yet and we still have to get through a race but things are feeling pretty good right now.”

After a difficult past two events, Winterbottom says it is great to bounce back with pole.

“It’s great to be back on pole position,” he said.

“It’s been a while, but the hard work has paid off. We’ve still got to do a bit more for the race, but it’s great to turn it around, and what a way to bounce back – take pole and do it by two-tenths. It’s pretty cool.”

Race 13 of the V8 Supercars Championship Series kicks off at 3.30pm (NT time).