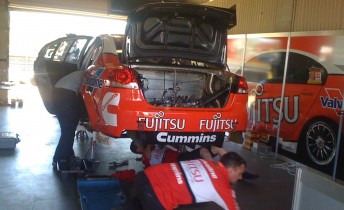 Two different types of differentials were trialled on seven cars in the opening V8 Supercars practice session at Hidden Valley Raceway this morning.

The trials were conducted as part of an evaluation for V8 Supercars’ Car of the Future regulations, which are due to be confirmed at the end of this month.

All of the top 14 cars in the championship were invited to test the new differentials as they are not permitted to compete in the first two practice sessions.

“It’s a completely different car to drive,” he said.

“It does what people are saying. It frees up the rear a little bit so the cars turn a bit better, but the problem is that the cars are so suited to the locked diff that it’s a lot worse to drive, at the moment.

“I’m sure if we spend a lot of time and money on it, we can make it work, but I’m not sure what path they want us to go down. We’ll see where it takes us.”

“The major difference were under brakes, exit oversteer – it wasn’t a happy car to drive. It really worked the rear tyres. You could see the other guys out there really struggling, even with power down. I’m not sure how they feel about it, but I certainly wouldn’t like to run it right now.”

This isn’t the first time that a V8 Supercars team has trialled a different rear end concept. In 2009, Paul Morris Motorsport used the Detroit Locker differential in testing and reported at the time that it would be a success.