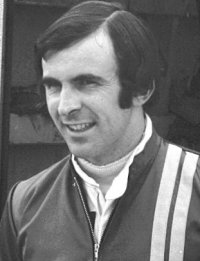 Tim Schenken has raced against some of the most famous names in Formula One, including drivers like Jackie Stewart, Niki Lauda, Jack Brabham, Emerson Fittipaldi, Graham Hill and Bruce McLaren. When Schenken started his F1 career in 1970 he was one of several Australians trying to make their name on the international circuit.

Mark Webber may be the lone Australian in the current F1 championship, but in 1970 Schenken was in Europe racing against Brabham and New Zealanders Denny Hulme and McLaren. In 1971 the numbers increased with Kiwis David Walker and Howden Ganley joining the grid and Alan Jones’ debut was imminent.

“I think in those days it sort of ran in cycles,” Tim Schenken explained to Speedcafe.com.au

“We had a period where there were several Frenchmen in the Championship. There were times with a lot of South Americans and then Germans.

“It just happened to be a phase that Formula One went through. It was odd. It doesn’t work that way these days of course.

“As far as contact went we had nothing to do with each other. First priority was to beat your team-mate and then the other Australian and New Zealand drivers. It was, as you’d expect, extremely competitive.”

Stability and consistency are clearly required if a driver wants to make his mark in any type of motor racing category; it was something that was lacking in Schenken’s five years as an F1 driver.

Interestingly Schenken does not describe his time in F1 as frustrating, nor does he show disdain, it was what it was.

“I got my first drive with Frank Williams in 1970 when Piers Courage was killed at Zandvoort,” said Schenken.

“I approached Williams to take over that drive and did those last four or five races, then I drove with Brabham in Formula 3 and Formula 2 which led to an F1 drive.

“In those days motor racing was all about development, but Brabham sold his team to Ron Tauranac, so the team was in turmoil. At the end of the year Tauranac sold the team to Bernie Eccelestone. He wanted a two year deal; I wanted a one year deal, so we never got an agreement together.

“I went to John Surtees and that was basically the end of it. Most people that drove for Surtees endured difficulties with him.

Schenken raced F1 cars for five seasons, with a best result of third at Austria in 1971 – his only Formula One podium.

“Third place at the Austrian Grand Prix in 1971 was easily my F1 highlight,” Schenken says.

“I had some other good races, I just had mechanical problems.

“The car was good, it just took me several GPs to learn how to drive the car right.

“You can all sit around and say if only this, if only that – at the end of the day it’s results that people remember you for.”

During this time Schenken also raced sportscars, enjoying considerable success in his Ferrari at races like the Buenos Aires and Nurburgring 1000km races which he won. He was an endurance race specialist enjoyed podiums at the Daytona six-hour, Sebring 12-hour and several other endurance classics, including second place in the GT class at the 1976 Le Mans 24-hour race.

“Sportscar racing was alright, but if you are a single seater driver, and it’s egotistical to say, but you want everything for yourself,” said Schenken.

“In 1972 I was with Ferrari, the best team. The first race I won was at Buenos Aires with Ronnie Peterson. It seems quite odd that you’re sharing the win, having two people on the top step of the podium.

“You had a lot of GP drivers racing in sportscars as well. It was a good test.

“All the cars that I drove were good, the ones that you win in are the best, but they were good days and it was good racing.”

These days Schenken is the V8 Supercars race director.

“I wanted to return to Australia and at the end of ‘83 the offer came up to interview for a job at CAMS (the governing body of Australian Motorsport),” said Schenken.

“It was good timing, the motor racing scene in Australia was exploding and I went along for the ride.

“We had international drivers coming out, so we were modelling the race director role on what they were doing overseas, which was introduced officially in 1987.

“I wanted to model Australian motorsport on what the FIA was doing internationally, it was important.”

It’s an unforgiving, thankless job, but he enjoys it, despite the negative press from time to time.

“I wouldn’t know what else to do to be honest, I love motorsport,” said Schenken,

“I’ve been racing since I was 18 and since 1968 onwards I’ve been fortunate to earn a living out of it.

“It’s a challenge and running a race or being involved in the organisation of a race is not unlike driving in as much as you’re learning the whole time, gaining experience the whole time.

“You never really get on top of it, there’s always something comes up that you haven’t experienced before, or has happened before. It’s a continual challenge.”