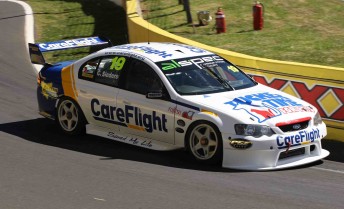 Colin Sieders has confirmed he will return to the Fujitsu V8 Supercars Series at the next round on the Townsville street track in three weeks time.

The New South Wales-based racer has entered his ex-Britek Motorsport Ford Falcon under the team name of ‘City of Townsville’ after securing support from an ever-growing list of local Townsville businesses.

So far, Sieders has picked up support from the Townsville RSL, Prime Movers North Queensland, Get Branded, Snap On Tools and the Townsville Business Technology Centre.

Sieders is one of 28 cars entered for the Fujitsu V8 Series round on the streets of Townsville – the most number of cars since Oran Park 2008. It is expected that 25-26 cars will compete.

Sieders hasn’t competed in the series since Bathurst last year and told Speedcafe.com.au that he is excited to be coming back.

“I can’t wait to come back – the track looks awesome,” he said.

“We’re trying to get some more local support up there. It’s got a pretty good response so far – we have the local RSL supporting us, and we’ll have the car on display there as well. It’s been pretty encouraging.”