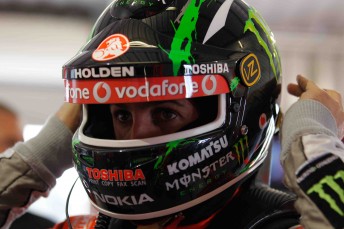 Jamie Whincup has topped the first day of practice for the Skycity Triple Crown at Hidden Valley today.

Whincup, driving a brand-new Holden Commodore VE this weekend, put a fresh set of control tyres on at the end of the session to score the top spot.

The dual series champion said that temperature at the Darwin circuit made driving incredibly uncomfortable..

“The conditions out there are so hot. It’s unbelievably hot,” he said. 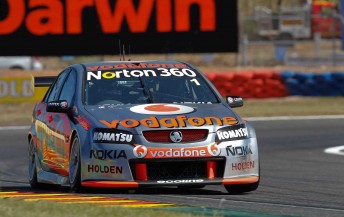 “Trying to keep the tyres going for more than three or four laps is almost impossible.

“We made a heap of changes, the car slowly deteriorated as it got hotter until right at the end where we put some new tyres on set a reasonable lap time.”

Winterbottom said that he was pleased to be back in the top three – even if no points were won today.

“It’s nice to be back up here. We’ve been written off a little bit lately after the last two rounds,” he said.

“I knew we’d get it back together as a team. When you’ve got people like Campbell Little in your team, we were always going to bounce back. It’s nice to be back up here.

“Today is Friday, we’ll see where we go tomorrow, but at least the car feels the way it should – Richo (Steven Richards) is fourth and PD (Paul Dumbrell) is up there as well.”

Kelly said that his #7 crew spent most of the final two sessions going through race simulations.

“We don’t really know where we are,” he said.

“I fell off on my first lap of the first session. I only had one set of good tyres for both sessions, so I did the time on the second lap which was in a completely different session to these guys, so it’s really hard to compare where we sit.

“Given that we only used one set of tyres, they just fell away more and more as the session went on and has given us a really good gauge on what to expect in the race. We did a fair bit of stuff to try and tune the car up as a race car. Hopefully, it will pay off for tomorrow.”