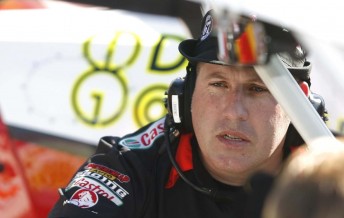 Josh Hughes will have Paul Morris in his corner for this year’s Commodore Cup Endurance Challenge at Winton Motor Raceway on June 26-27.

The two-time Bathurst 12 Hour winner will partner Hughes in the two 45-minute endurance races, with the pair taking on other V8 stars like Lee Holdsworth, Steve Owen and Shane Price.

According to Hughes, currently fifth in the Commodore Cup standings, Morris’s experience in endurance racing made him the prime candidate for the seat.

“I wanted someone with experience, and someone I could learn from,” Hughes said.

“Paul obviously has a lot of experience in all sorts of racing over a long period of time, especially endurance racing.

“Paul’s V8 Supercar connection is also a big advantage, because it gives me a link to a V8 Supercar team.”

Morris will compete in the V8 Supercars endurance races this year with Russell Ingall in the Supercheap Auto Racing Commodore VE.

Meanwhile, after a strong run in the previous round of the series at Mallala, Hughes is confident he and Morris can challenge for a podium finish in Commodore Cup’s flagship event.

“My car is as good as all the other cars out there, and I think the lap-times between all the top runners will be really close. I think the results will come down to pit-stops,” Hughes said.

“There’s some strong competition. I think Tony Bates and Geoff Emery will be very hard to beat, obviously Lee and Brett Holdsworth will be quick, and Ross McGregor and Steve Owen will be right up there as well. It should be a really good event,” Hughes concluded.

Practice for the Commodore Cup Endurance Challenge commences on Friday, June 25 ahead of the two races.