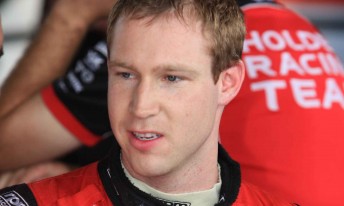 David Reynolds is poised to make a return to the Fujitsu V8 Supercars Series in the next round at Townsville with Walkinshaw Racing next month.

The 24-year-old is pencilled in to drive Fabian Coulthard’s ex-Bundaberg Red Racing Commodore VE on the Townsville street track, as Coulthard has assumed the reins of Garth Tander’s Toll HRT Commodore. Tander will debut a brand-new car at Darwin’s Hidden Valley circuit this weekend.

Walkinshaw Racing team member Rob Crawford nor Reynolds would comment about the entry when contacted by Speedcafe.com.au. It is set to be a return to the Fujitsu Series for Reynolds, who competed in the class in 2008, finishing fourth with Tony D’Alberto Racing. He was promoted to the Championship Series with Bundaberg Red Racing last year, going within a few laps of a podium result at Barbagallo Raceway before a mechanical failure robbed him of a result. He finished 22nd in the title.

This year, Reynolds has remained on the sidelines, but was retained by Walkinshaw Racing as an endurance driver.

A total of 26 cars have entered their intentions to race at Hidden Valley – the most number of entries in the series since the final round of the 2008 title at Oran Park.