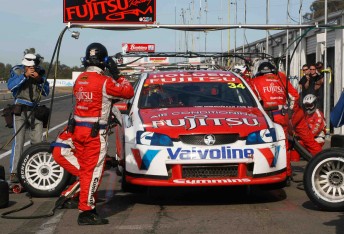 Michael Caruso's #34 Fujitsu Commodore gets serviced in pitlane at Winton

Caruso’s Fujitsu Racing Commodore VE will be engineered for the first time this year by Steven Todkill, Caruso’s former data engineer who steps up to the main engineering role on the #34 car, replacing Chris Harris who assumes Todkill’s role as data engineer.

Caruso’s former engineer Harris has moved into the data role, as the team has recently taken delivery of a new shock dyno and Harris will take a greater role in that department.

Todkill has been Caruso’s data engineer since he started driving for the Garry Rogers Motorsport team in 2008.

Caruso said that the engineer change is a positive for him in his attempt to score another victory at the Darwin circuit.

“Steve has been on my car the whole time. He’s got a good understanding for what I need the car to do to make it go fast,” he told Speedcafe.com.au.

“He actually engineered my car in Sydney when I ran second, and since Richard Hollway (team-mate Lee Holdsworth’s engineer) has come on board, a few things have changed and he’s back on my car. Everyone’s happy about it. It gives us a little bit of extra confidence to hopefully go back up there and do what we need to do.”

This weekend’s round will be foreign territory for Caruso. Besides the engineer change, Caruso has never entered a V8 round as the circuit’s reigning winner. His one career win came at Hidden Valley last year and he says he has all the ingredients to repeat the performance.

“I’ve never been in this position before, so it’s reliving a moment which is good,” he said.

“I suppose it puts a bit of pressure on and everyone is hoping we can go back-to-back. It’s going to be tough. Every race seems to be getting harder and harder, and you’ve just got to make sure you’re doing your best to get right up there.

“A win is definitely not out of the question, but I’d be happy to come home with a couple of podiums.

“We’ve been in the hunt for the last few rounds where we’ve been quick enough where things haven’t gone our way on the day, but that’s racing.

“Going up there knowing that we have the car capable of doing the job like last year is a pretty good feeling.”

Caruso, currently ninth in the V8 standings, says that compared to last year, the whole team has lifted its game.

“We’ve definitely improved since last year, and we’ve slowly improving a little but more each round and learning more,” he said.

“With a new engineer as well, little things like that will help, but we’re still the same team and everyone is hungry to win. Knowing that we won there last year is a bit of motivation to know that we can win races, we just need to push a little harder.”

The V8 Supercars hit the track for its first practice session this weekend on Friday at 10.30am.