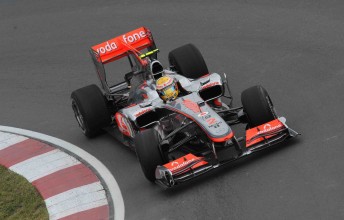 In a race dictated by tyre strategy, Hamilton converted his pole into his second win at the Circuit Gilles Villeneuve. It was also his 13th career win and moves him to the top of the world championship standings ahead of Button and Mark Webber.

Sebastian Vettel was fourth ahead of team-mate Mark Webber. The Red Bull pair both led the race at various points but were both hampered by less than ideal tyre strategy.

Vettel might have had an opportunity to challenge for a podium, but a mechanical problem hindered his progress, forcing him to back off and collect fourth.

Webber led the midpoint of the race as the Red Bull Racing team tried to run him as long as possible on the hard tyre, but eventually fell into the grasp of Hamilton and Alonso. By the time he pitted, he dropped to fifth where he remained. The results has dropped the Australian to third in the world title.