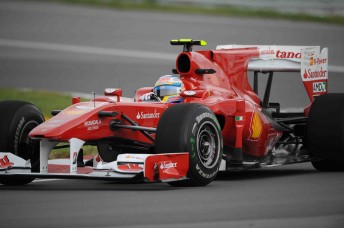 Fernando Alonso has admitted he was surprised to score a third place finish in the Canadian Grand Prix – a result which puts his championship challenge back on track.

The Spaniard’s first season with Ferrari started perfectly with a victory in Bahrain, but a litany of problems in recent races had seen Alonso slip to fifth in the points standings.

Last time out in Turkey, the double World Champion qualified 12th and finished eighth – some 47 seconds behind winner Lewis Hamilton.

In Canada, Alonso diced with Hamilton for the lead in the opening phase of the race, and eventually finished third – just nine seconds behind Hamilton – after losing second to Jenson Button in traffic during the closing stages.

“It’s great to be back on the podium and especially to be able to fight for the top places once again,” said Alonso.

“We could have won but we did not manage it because, on a few occasions, we paid a heavy price for the traffic. These things can happen to anyone in a race and this time it was our turn.

“This result is a great motivation for a team that did a great job, in terms of strategy and handling the pit stops.

“From what we had seen in Turkey, we had not really expected to have this level of performance.”

Fellow Ferrari pilot Felipe Massa had a less encouraging day – finishing 15th after a first corner scrap with Tonio Liuzzi, and a later dice with Michael Schumacher, both resulted in pit stops for new front wings. A post-race penalty for pit lane speeding only furthered the embarrassment.

The Brazilian, who recently signed a two-year contract extension with the Scuderia, drops to eighth in the championship, four places behind Alonso.

“This was a horrible race, in which everything happened to me,” lamented Massa.

“I expect to do better in Valencia because there will be updates on the F10 and I hope to be in the fight for the top places.”