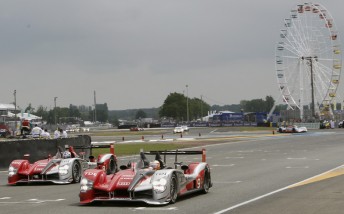 Audi has pulled off an unlikely one-two-three finish at the Le Mans 24 Hour in France, smashing its faster but more fragile Peugeot rivals in a record breaking race in terms of distance covered.

The #9 R15 TDI of Mike Rockenfeller, Timo Bernard and Romain Dumas took victory in another fascinating tussle between the two marques, in something of an underdog victory ahead of more fancied driver line-ups from both squads.

The #9 entry had a largely trouble free race at the Le Sarthe, ensuring that Audi took back outright honours after losing to Peugeot last year, and also giving Germany’s Rockenfeller overall victory in the Daytona 24 Hour and Le Mans in the same year.

The second placed #8 Audi of Andre Lotterer, Marcel Fassler and Benoit Treluyer was only one lap behind the winning team in the final hours, but an small off from Lotterer in the 22nd hour forced him to pit for new front bodywork, giving their team-mates a small but vital advantage.

Shortly after Lotterer’s off, the final gasp of Peugeot’s factory challenge was extinguished as Alexander Wurz suffered an engine failure in the #1 Peugeot, with the lead car of the Lion’s squad setting remarkably fast lap times as it tracked down the Audi duo.

Wurz and team-mates Anthony Davidson and Marc Gene were as much as five seconds a lap faster than the Audis as they tried to reel in a three lap deficit, but their gamble did not pay off as the #1 entry made it a trio of factory Peugeot 908 HDi – FAP prototypes that all fell mechanical problems.

In the closing stages of the race it looked to be the quasi-factory Oreca 908 of Loic Duval, Nicholas Lappiere and Olivier Panis that would be the best of the Peugeots, but as it pushed the third placed #7 Audi hard with the two on the same lap, another Peugeot engine failed, ending the French challenge.

The Oreca failure made it three engine failure for the four Peugeots, with the #3 908 retiring after a suspension hub broke away from the chassis tub. The heartbreaking failures saw both Peugeot Sport chief Olivier Quesnel and Oreca boss Hugues de Chaunac in tears in pit lane.

The lead R15 of Tom Kristensen, Allan McNish and Dindo Capello was easily the fastest of the Audis, but its chances were blown when Kristensen was pushed off the road inadvertently in a clash with the GT2 BMW of Andy Priaulx. The experienced trio recovered to claim third and give Audi a clean sweep of the outright podium.

The leading petrol-fuelled car was the Oreca 01 AIM of Soheil Ayari, Didier Andre and Andy Meyrick, benefiting from the engine failure of the #009 Aston Martin Prodrive entry in the penultimate hour of the race, while it was the Strakka Racing Honda of Nick Leventis, Danny Watts and Jonny Kane that topped LMP2.

Aussie ace David Brabham was in contention for class victory in LMP2 in HIghcroft Racing’s Le Mans 24 Hour debut, but water cooling problems on the HPD ARX.01’s engine put pay to any chances of a fourth class win for Brabham at Le Mans.

With event organisers the ACO announcing over the weekend that this will be the last year of the GT1 class, it should be noted that the two leading GT2 entries both defeated the winning GT1 car, the Larbre Competition Saleen S7R of Roland Berville, Julien Canal and Gabriele Gardel.

Denmark’s Allan Simonsen, a driver known well to Australia, was embroiled in a battle for GT2 honours in the final stages of the race, but just fell short of class victory by finishing in second place in GT2 in the #89 Hankook Farnbacher Ferrari F430 GT2 with team-mates Dominik Farnbacher and Leh Keen.

GT2 honours went to Marc Lieb, Richard Lietz and Wolf Henzler in a Porsche 997 GT3 RSR, with the Chevrolet Corvette of Emmanuel Collard, Olivier Beretta and Oliver Gavin crashing out of the GT2 class lead in the last third of the race as a result of an incident with the #1 Peugeot.