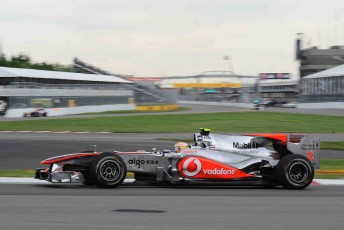 Button, who is currently second in the points standings, ended practice just 11th fastest after struggling on the softer compound “Option” tyre.

“It was tough on the long runs – the tyres didn’t last long,” said the reigning World Champion.

“I ran with the Option tyre at the end of the session for just a couple of laps, and it grained so much that I had to put the Prime on, where I was two or three seconds quicker than the cars still running Options.

“Still, I then started experiencing graining as well, so we have a few tyre issues – but then again I think almost everybody is struggling with tyre issues here. It could be a pretty interesting race.”

Hamilton fared slightly better in seventh, and also believes that others are experiencing similar tyre problems.

“The graining on the Option tyre made things difficult, but I think everybody had a similar experience out there, except maybe the Red Bulls,” he said.

“I don’t think you’ll be seeing a long first stint on the Option tyre on Sunday, that’s for sure.”

Hamilton also expressed his frustration with the condition of the circuit, which is used just twice a year.

“The track has been incredibly difficult to drive,” said the Briton.

“It’s very hard to switch the tyres on and get heat into them – it’s so slippery, it’s like driving on an ice rink. It’s such a huge difference from when we were last here (2008).”

With more showers expected throughout the weekend, the track’s grip level is unlikely to increase significantly for Sunday’s race.