The pair was invited to conduct the coin toss in the middle of the ground as part of the Robert Rose Cup which is awarded to the winner of the Magpies/Bulldogs fixture each year.

The Robert Rose Foundation was created in 1999, soon after the death of Robert Rose, a brilliant sportsman who became a quadriplegic as a 22-year-old. An all-round sportsman, Rose played games for Collingwood’s VFL team and was on the brink of selection for Australia’s national cricket team until he was involved in a car accident that left him a quadriplegic. 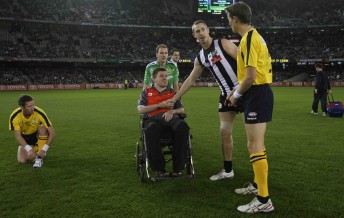 Nick Maxwell shakes hands with Lucas Dumbrell before the match

Lucas, who is a quadriplegic after his Formula Ford accident at Oran Park in 2008, now owns and operates his own V8 Supercars team, while his brother Paul competes in the series for The Bottle-O Racing team.

Lucas told Speedcafe.com.au that it was an honour to be involved in the various ceremonies on the day.

“They asked me to come along to the game. I went out on the ground and flipped the coin with PD. I also presented the cup to the winning side which was Collingwood at the end of the game,” he said.

“Being a Collingwood supporter, I was pretty happy with that!

“I made a speech at the President’s Lunch function in front of 750 people. I also had a Q&A with Eddie McGuire (Collingwood President).

“Not many people get to go out to the coin toss for a footy match. It was pretty cool. It was a great honour to be asked by Collingwood and the Robert Rose Foundation to be part of the day. I had a bit of fun and it would be great to do it again next year.”

“The mirrors on my race car have Collingwood logos on them and they’ll go up in value if they do win!”