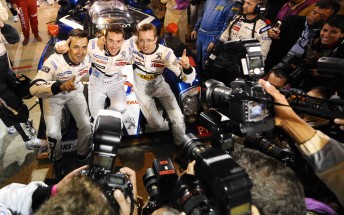 It’s a Peugeot lock-out at Le Mans as the French force commandeered the pointy end of the grid, with the Pugs taking 1-2-3-4 on the grid.

Sebastian Bourdais, who will drive with Dick Johnson Racing at this year’s Armor All Gold Coast 600 in October, will start the classic race from pole position with his Wednesday time of 3m19.711s. His team-mates for the race are Pedro Lamy and Simon Pagenaud.

The first two hours ran in drying conditions from 7pm to 9pm with the customary 60-minute break before the final two-hour blast. The first casualty was Jean-Christophe Boullion who backed the Rebellion Racing Lola off the road at the Porsche Curves, resurfaced for 2010, and did substantial damage to the rear and the right-hand side. Later it was found to have a damaged tub as well.

The surprise of the first session tonight was that Sarrazin, a renowned hero in qualifying, wasn’t able to improve despite two stellar sector times. Traffic caught him at the end of the lap and his best shot was wasted. However, as the only car with three French drivers, one could argue the case for this car being first home, pace or not.

Fourth on the grid will be the privateer Oreca-run Peugeot of Nicolas Lapierre/Olivier Panis/Loic Duval that may yet prove to be capable of mixing it with the works cars for an outright win. Team boss Hugues de Chaunac certainly isn’t there to make up the numbers.

Alan McNish was the most toey after the break by hustling the number 7 Audi R15 (modified for 2010) up to sixth behind the sister car of Mike Rockenfeller, but the true picture of the car’s pace was summed up by co-driver Tom Kristensen. When asked if he was happy with the car’s Wednesday pace, the Great Dane said, “We are happy with where we are, it’s just that the others are in a different place …”

Audi has looked off the pace all through qualifying and current evidence suggests it will struggle to beat Peugeot, but that could be Audi not showing its hand just yet. Saturday’s first stints will reveal all but fifth, sixth and seventh is not what you expect from the Ingolstadt concern. In terms of time, the gap between the fastest Peugeot and the fastest Audi is 2.2 seconds.

LMP2 produced the best battle of the night with David Brabham (Highcroft Racing HPD ARX.01) taking pole position in class just before the break at 9pm. After dinner, when the session resumed at 10pm, Brabs had to digest the fact that the rival HPD of Strakka Racing had gone yet quicker to retake the class pole – Danny Watts lapped over three seconds faster than he had last night to do a 3m33.079s lap.

GT2’s pole-sitting Ferrari F430GT of Gimmi Bruni/Pierre Kaffer/Jaime Melo spent the early part of the session setting its headlights to the correct angle for the night and ran on its race engine and gearbox. Work done, the team parked early.

In GT1, the class to be dropped for next year according to the ACO, the Aston Martin of Thomas Enge/Christoffer Nygaard/Peter Kox cemented its class pole ahead of the Ford GTs of Markus Paltalla/Bas Leinders/Eric de Doncker and Romain Grosjean/Thomas Mutsch/Jonathan Hirschi.

As normal, a number of teams suffered dramas: RML’s LMP2 Lola-HPD had a spin when Mike Newton rotated at Tertre Rouge (the car being shared by Bathurst 24 Hour visitor Tommy Erdos and 1988 Le Mans winner Andy Wallace), while the Signature Plus Lola-Aston Martin of Pierre Ragues suffered a puncture.

For Australian viewers, the Le Mans 24 Hour will be broadcast live on ONE HD and Eurosport. CLICK HERE for full details.