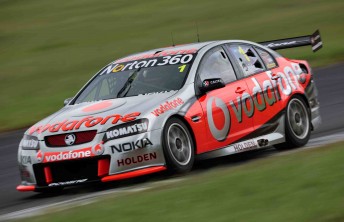 Jamie Whincup has given the tick of approval to his brand-new TeamVodafone Commodore VE – even if he can’t feel a great difference between it and his old Holden.

The reigning V8 Supercars Champion, recently dethroned as the championship leader for the first time since October 2008, shook down his new machine at Queensland Raceway yesterday, saying it is fast, but no different to his previous Commodore.

“Overall I’m really happy with the day, we successfully completed our 20 laps. There were no mechanical issues which represents quality engineering,” he said.

“This car feels the same as the last car, which is a good thing, and it has no shortage of speed.

“There’s no secret the sprint tyres are my weakness at the moment but we will be putting our focus to turning that around for Sunday’s race in Darwin.”

While Whincup runs second in the championship, not far behind is his team-mate Craig Lowndes. Darwin has been a happy hunting ground for Lowndes in previous years. The popular TeamVodafone driver won the event in 2006 and 2007 and scored the most number of points for the weekend in 2009, finishing sixth and third in the two races.

“I love going to Darwin for this event, its a favourite with many of the drivers as the whole community gets behind it,” Lowndes said.

“It’s a track where I’ve had success in the past but that means very little this weekend. I’ve got to put my head down and continue to collect points to keep in this championship hunt.

“The soft tyres added a new variable into the mix last year, this will be evened out a little now that we can only use the tyres on the Sunday,” he added.

The V8s will race at Darwin on Dunlop’s Control tyre, with one set of Sprint tyres available to use in Sunday’s race only.

Next weekend’s Hidden Valley round will also be the first time all teams will use the control camshaft.