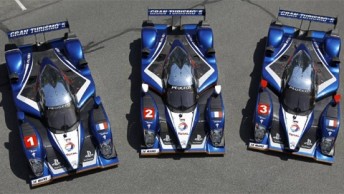 This weekend’s Le Mans 24 Hours is once again set to feature a day-long duel between sportscar heavyweights Peugeot and Audi, with both manufacturers fielding three-car teams in their bid for glory.

While Peugeot will defend their crown with the familiar 908 HDI, all eyes will be on the heavily upgraded Audi R15 Plus – which won on debut at Paul Ricard in April.

The German marque has not lost two-consecutive Le Mans 24 Hours since their modern day program began in 1999, and are confident that a more thorough pre-event schedule this year will prevent a repeat of 2009 – where the original R15 proved neither fast nor reliable.

For the fourth consecutive year, Audi’s attack will be spearheaded by Tom Kristensen, Dindo Capello and Allan McNish, who have amassed a combined 13 wins in the French classic.

The star #7 entry will be supported by Timo Bernhard, Romains Dumas and Mike Rockenfeller in car #9, with ‘Rocky’ aiming to add a Le Mans victory to his Daytona 24 Hours win in February. Car #8, driven by Marcel Fässler, Benoit Treluyer and André Lotterer, may well be perceived as the weakest of the six potential winners – especially after Lotterer crashed on the warm-up lap at last month’s 1000 km of Spa.

The Le Mans Series race at Spa has been the only confrontation between the Audi and Peugeot factory teams thus far in 2010 – with the French team’s 1-2 finish adding to their similar effort in March’s Sebring 12 Hour.

Car #2 car also features a revised line-up, with Nicolas Minassian moving to the all-French 908 alongside Franck Montagny and Stéphane Sarrazin. Peugeot favourites Sébastien Bourdais and Pedro Lamy will be joined by Simon Pagenaud in car #3 – rounding out one of the most impressive team line-ups in the history of the race.

While the winner will no doubt come from one of the six factory diesel entries, a total of 18 LMP1 cars will start the event, including a privateer 908 from Team Oreca Matmut and a pair of Audi R10s from Kolles.

The petrol LMP1 class is once again expected to be led by Aston Martin Racing – who has reduced their entry to two cars this year – with Stefan Mücke, Harold Primat and Adrian Fernandez aiming to capitalise on any misfortune amongst the diesels. They will face Nigel, Greg and Leo Mansell’s Ginetta Zytek, as well as an assortment of Lolas for the honour of being the top petrol-powered car home.

The LMP2 class is well supported in 2010, with much interest surrounding the fortunes of the interloping ALMS team Highcroft Racing, whose HPD will be driven by Brabham, Marino Franchitti and Marco Werner. The Australian will be aiming for his fourth consecutive class victory at Le Mans, having taken out GT1 with Aston Martin Racing in 2007 and 2008 prior to his LMP1 success with Peugeot last year.

The team’s main opposition will likely come from the other HPD in the race, fielded by British team Strakka Racing, and the Quifel-ASM Team’s Ginetta Zytek – which won the LMP2 class at Spa.

GT1 also features increased competition this year, thanks to the accommodation of cars complying with the new GT1 World Championship rules. Five marques will be represented, with the familiar Aston Martin, Corvette and Lamborghini entries being joined by a Saleen S7R and a trio of Ford GTs.

The lead Matech Ford, driven by Thomas Mutsch, Romain Grosjean and Jonathan Hirschi, looks set to contend for the win against Luc Alphand’s pair of Corvettes, and the AMR Young Driver DBR9 of Tomas Enge, Peter Kox and Christoffer Nygaard.

Missing from GT1 this year is the factory Corvette Racing squad, who turn their attention to GT2 with their newly homologated C6s. Usually a Porsche and Ferrari benefit, GT2 will also feature an Aston Martin Vantage, a Jaguar XKRS, a Spyker C8, and a two-car factory BMW M3 effort – the Bavarians returning to Le Mans for the first time in 11 years.

The six-car Porsche attack is expected to be led by the #77 Team Felbermayr Proton entry, while defending winners Risi Competition will field two of five Ferraris. Honorary Australian Allan Simonsen will once again compete in the Hankook Team Farnbacher Ferrari, which was dogged by tyre problems in 2009.