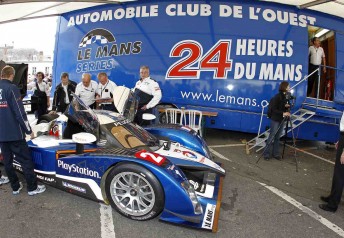 Sebastian Bourdais was the star of the opening day of action at Le Mans as he topped the times at the end of the first qualifying session.

In a session that was dry but was stopped twice due to accidents, the former F1 racer produced a storming lap with absolute best times across all three sectors to go top with a lap at 3m19.711s to head a Peugeot 1-2-3-4.

The Oreca-run privateer Peugeot 908 took pole position early in the session with Nicolas Lapierre at the wheel but he failed to complete his next lap as the car ran out of fuel and was stranded out on the circuit.

His inability to respond allowed Alex Wurz to go second and Stephane Sarrazin third to secure the top slots for the works Peugeots.

Audi’s challenge was underwhelming for the most part of the session with the fleetest car being driven by Andre Lotterer who put the car fifth fastest at half-time in the two-hour session.

The unofficial petrol class was topped by the 007 Lola-Aston Martin of Stefan Mucke (who did the time)/Harald Primat/Adrian Fernandez while Darren Turner in the sister car (shared with Juan Barazi and Sam Hancock) bagged second of the petrol cars right at the very end of the session. The car had been pitched into a spin by Juan Barazi at the start of the session at the Ford Chicane, the Danish diamond dealer racing an LMP1 car for the first time.

LMP2 developed into the expected battle between the HPD of Jonny Kane/Danny Watts/Nick Leventis and the Highcroft Racing HPD of David Brabham/Marino Franchitti/Marco Werner with the British car over a second faster. Third fastest, four seconds adrift, was the Quifel-ASM Team Ginetta of Warren Hughes/Olivier Pla/Miguel Amaral.

The new GT1 cars were headed by Tomas Enge/Peter Kox/Christopher Nygaard (Aston Martin DBR9) from the Ford GT of Thomas Mutsch/Romain Grosjean/Jonathan Hirschi – the Ford’s pace was encouraging, as Grosjean had crashed it in the free practice. Third in GT1 was the Corvette of Julien Jousse/Xavier Maassen/Patrice Goueslard.

In GT2, perhaps the most competitive class this year, Gianmaria Bruni set an early pole time in his Risi Competizione Ferrari F430GT despite the car pulling to one side. Bruni did the time on his fifth lap on his existing set of tyres as traffic hampered his early efforts and having bagged pole, he pitted. The team discovered that the car had a broken output shaft from the gearbox that was a high-mileage part and had been in the car since Sebring in March. “Better it happens today than on Saturday,” said a team insider.

Incidents befell the GT2 Team Felbermayr-Proton Porsche of Horst Felbermayr junior and senior/Miro Konopka that crashed early in the session between Mulsanne Corner and Indianapolis and then Matias Russo crunched the AF Corse Ferrari later in the session.

Despite forecasts of rain tomorrow, and hence the importance of tonight’s dry qualifying session, it didn’t produce the thriller that was anticipated. If it does rain tomorrow, we’ve got the grid – if it is dry, then it should be a dramatic four hours.