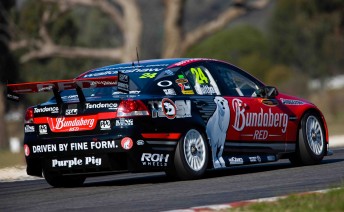 Fabian Coulthard at the team's Winton test day on Monday

Fabian Coulthard is sick of saying things like “this is going to be our round.”

The Bundaberg Red Racing driver, currently a lowly 24th in the V8 Supercars Championship Series, wants his luck to change.

From next weekend’s V8 races at Hidden Valley Raceway, the New Zealander will take over the Toll Holden Racing Team Commodore VE that Garth Tander has campaigned for the past three seasons.

Will that lead to a change in fortune? Coulthard doesn’t think that a switch of cars is the final answer to his on-track struggles.

“I drove Garth and Will’s (Davison) car before, and they are very similar to mine. I don’t think changing cars is the final fix,” he told Speedcafe.com.au.

“We had a good test day (Monday at Winton) and I think we’ve found some definite inroads in the car’s performance to get it more to my liking. We need balance. When we go to each race, it needs to be similar, not totally different.

“The biggest thing is that, hopefully, we’ve found balance and we have a direction. I’m eager to get to Darwin.”

New car or not, Coulthard says that the change couldn’t be any worse than where he is currently at.

“We can only go forward from where we are,” he said.

“There’s no reason why our championship can’t turn around. I’ve said a few times before rounds this year that “this is going to be our weekend.” It hasn’t gone that way.

“It’s got to change and its got to turn around at some point, and hopefully Darwin will be that time.”